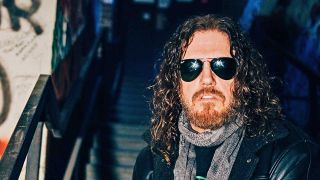 Since the collapse of the classic line-up in the early 90s, Guns N’ Roses has been a precarious gig, spitting out musicians at such a rate that Slash once claimed: “There’s not one other fucker in the band I even know.” It’s impressive, then, that Dizzy Reed has held his spot at the keyboards since 1990, and today has a tenure second only to Axl Rose. Ten years after the Chinese Democracy album, and with the Not In This Lifetime tour parked until June, Reed has found time for a debut solo album, one that runs with the sleaze-rock baton.

What sort of things should we do while listening to your new solo album, Rock ’N Roll Ain’t Easy?

Drinking. Fighting. Having sex. All of the above. Anything that you consider a good time. And any time you want to be reflective.

The album is brilliantly sleazy: do you take that word as a compliment?

I do, actually. In a lot of cases, that’s what we’re going for. The cool thing was, since I was producing it and I’d written almost everything, I was in charge, so I could do what the hell I wanted. And it turned out pretty damn good.

What the songs are about?

Dirty Bomb, I’d read some story in the paper about this Russian chick who was selling nuclear secrets for money. I thought: “We’re in a fucked place.” I handed it to [co-writer] Del James and we turned it into a character, created some imagery along the lines of T.Rex meets Duran Duran. This Don’t Look Like Vegas is a song that Ricky Warwick and Del brought in, about their twisted adventure to Vegas. Cheers 2 R Oblivion is the classic ‘love gone wrong’ song, with a touch of the end of the world, because that’s where my head was at. When I wrote that song I didn’t care about much at all. The world could have ended, I wouldn’t have given a shit. I was in a tough place, going through a hard time with one of my relationships.

Where would you be if you weren’t able to find catharsis through music?

There’s a very, very good chance I could be in a mental asylum if I didn’t play music. There’s a chance I could end up there anyway. If I wasn’t doing this I’d probably be sitting in a bar somewhere, saying: “God, I wish I was playing music.” That’s all I’ve ever done.

How about the title track, Rock ’N Roll Ain’t Easy?

Y’know, I was in a spot [when I wrote that]. I’d had a lot of success. I’d been around the world. I’d been a part of some great tours, some great records. But suddenly my first marriage had dissolved. Half my stuff was in my trunk and I was living in this dirty apartment in North Hollywood again. And it was raining outside. I’d gone full circle. And I thought: “I’m gonna put this situation to work for me.” So I picked up a guitar and I came up with that song. The silver lining is, the person who was living in that apartment ended up being my wife. We’re happily married now. But rock’n’roll ain’t easy. Most people think it’s just sex, drugs and parties. I got into playing music for a living because I didn’t want to have a job. Ironically, to maintain in this business, you have to work way more than most people.

When you joined Guns N’ Roses, were you concerned about their reputation?

Nah, I was right there with them. It didn’t skip a beat with me, that shit. I was in a band called The Wild – and we lived up to our name.

How wild were the GN’R tours back in the early nineties?

Are Guns N’ Roses better without the drugs?

Everybody’s better without the drugs.

What are your favourite moments from the GN’R catalogue?

I’d say Civil War, because that was the first song I played with the band and the first time I heard myself on the radio. But I had the triumvirate from hell in the control room – which was Slash, Duff and Axl – telling me what I should do, all at once. But I made it through.

How would you describe your relationship with Axl?

He’s a great person. He’s one of the funniest people I know. Every night before we go on stage, he comes up and he’ll have a joke – and it’s usually a good one. And nobody works harder than that guy. He’s always misrepresented in the press. It’s kinda sad, really, what some people come up with just to sell things.

So many musicians have come and gone in GN’R. What has enabled you to last so long?

I was given a great opportunity by Axl and the band when they were at the top of the heap. I just thought I always want to give back. Whatever they need from me, they’re gonna get it.

Have you ever felt like you were close to getting the sack?

No, I don’t know if I’ve ever got that feeling. But if I’m fucking up, someone’s gonna let me know.

What has been your biggest waste of money?

Doesn’t it pay well being in Guns N’ Roses?

It pays okay. But, y’know, I’m good with my money; I got an ex-wife and four kids.

Do keyboard players get the respect they deserve?

Absolutely not. Never, never, never. Y’know, it’s a singer and a guitar player’s world. We’re just living in it.

I was deceptively quiet, and just wanted to get it over with. My band was my identity. School was just something I had to go through.