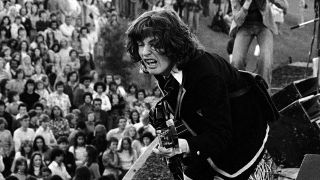 Already earmarked by Ted Albert, the main man behind his father’s Albert Music company (Australia’s leading independent record label and publishing house), as something special, AC/DC were just a year old when they went into Albert’s own studios in Sydney to record their debut album.

Formed in November 1973 by the 20-year old guitarist Malcolm Young, the band had spent a year honing their raw, electrifying rock’n’roll around Australia’s notorious hotel circuit. With Malcolm’s 18-year old brother Angus on lead guitar and Welsh-born, fellow immigrant Dave Evans as singer, a procession of drummers and bassists had passed through as they searched for a solid line-up.

With Evans, AC/DC had recorded the single Can I Sit Next To You, Girl at Albert Studios in early 1974. However, by the time they set to work on their first album, eight months down the line, he’d been replaced by their roadie, Bon Scott.

With elder Young brother George helping out on drums and bass when needed (along with his fellow Easybeats band member Harry Vanda, he would also act as producer), as well as the now recognised trio of Young, Young and Scott, sometime members Pete Clack and Tony Currenti played drums and bassist Rob Bailey contributed to some tracks.

With glam rock in the ascendency at the time, it is quite clear that High Voltage draws its inspiration from an earlier era. The album cover, featuring a dog urinating over an electricity substation – outrageous upon release to the conservative Aussie press, and ramming home the band’s sense of anti-establishment – is a far cry from the album sleeves of their glammier peers such as Skyhooks, Hush and Sherbet.

The songs have elemental melodies and the boys’ way with a backing chorus suggests that the glam craze had some effect on the young AC/DC, but also present is a strong hint of the blues-based hard rock of Free combined with the chugging early rock’n’roll style, something that would swiftly develop into AC/DC’s trademark sound.

Having such varied personnel might go some way to explaining the slightly disjointed feel of High Voltage when placed alongside the more assured sequencing of later albums like Let There Be Rock or Powerage. The newly-formed engine room of Malcolm and Angus Young was central to the sound of the record, the brothers’ drive and ambition burning through its nine tracks.

Bon Scott had been the band’s singer for just two months, but he already sounded like he’d fronted AC/DC forever. Much of this has to do with Scott’s wordplay, a key ingredient of the band’s appeal since his time with them, and one that continued to loom over AC/DC following his tragic death in 1980.

The third is the rollicking She’s Got Balls, an ode by Bon dedicated to his ex-wife Irene, and probably the standout on the record. Only that and Little Lover would make the cut when tracks from the band’s first two, Australia-only, albums were combined for an album for international release, confusingly also titled High Voltage.

Four months later, and with a No.7 album under their belts, AC/DC were back in Albert Studios in Sydney, working on their next record. George Young and Harry Vanda again looked after the production, but by this time the band’s line-up had solidified, with Phil Rudd, formerly of Buster Brown, on drums, and Mark Evans, a pal of the band’s road manager Steve McGrath, on bass.

And this new-found sense of stability helped mark the difference between the sound of the band on their debut album, and that which would hit home with much more precision on T.N.T., its follow-up.

Where High Voltage sounded like a band taking their first, albeit still electrifying, steps into the world of rock’n’roll, T.N.T. not only sent out a strong signal that here was a band to stay for the long haul, but it also gave every indication that here was a group who just might have what it takes to go all the way to the top; the start of the now well-recognised relentless AC/DC boogie machine.

Much of the material on T.N.T. (and subsequently on their international debut High Voltage) stands head and shoulders above that on the debut. In just a short space of time the band had already come up with what would prove to be evergreen classics: It’s A Long Way To The Top (If You Want To Rock’n’Roll), The Jack, High Voltage and the album’s title track, all of which have been staples of AC/DC’s scintillating live shows over the past four decades.

By T.N.T., the sound of AC/DC had shifted away from any of the glam pretensions that might have been evident on High Voltage, and built further on the hard-hitting blues-rock approach that would characterise their sound henceforth. A further pointer to the inspiration for their driving rock sound shows in the one cover version that sat alongside eight originals: Chuck Berry’s School Days.

Whichever way you look at it, T.N.T. is far and away above High Voltage. It sold much better as well, preceded by two singles: High Voltage in July 1975 and It’s A Long Way To The Top (If You Want To Rock’n’Roll) in December. Both these promotional pushes considerably raised the band’s profile in their native Australia.

A promotional video for It’s A Long Way To The Top, featuring the band performing with the Rats Of Tobruk Pipe Band on the back of a truck on Melbourne’s Swanston Street, proved immensely popular, as did a performance on Australia’s national TV music show Countdown, with Bon Scott dressed as a schoolgirl and wearing a blonde wig.

Ironically, T.N.T. remains the only AC/DC album released in Australia that doesn’t have an international version on Atlantic Records, although all the tracks from it eventually appeared on other international releases. Regardless, it is the AC/DC album that set the young band on a duck-walking path to worldwide glory and huge commercial success.

Later, a proud George Young would proclaim of his younger siblings: “All of a sudden the kid brothers were still the kid brothers… but my god, they knew how to play. There was no sort of ‘Do they have it or don’t they have it?’ It was obvious that they had something.”