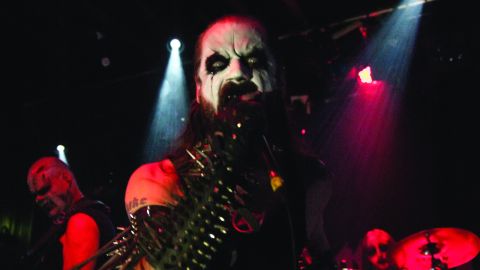 By their very nature – tonight’s flier awkwardly displays past members King and Gaahl – any appearance by Gorgoroth will always be met with a degree of inquiry and suspense by both hardened black metallers and casual onlookers alike, as the diverse crowd here testifies.

“We’re the least scary band of the night,” assures DE PROFUNDIS [7] singer Craig Land, as he tries to spark interest in his band’s heroic, progressive take on extreme metal. Despite the rumbling sound doing little for their flourishes, the imaginative arrangements and thrill of The Illumination and Singularity are delivered with the gusto and proficiency of a band headlining an arena. In comparison the churning, ominous maelstrom GEHENNA [7] is a frightening presence. Even though the Norwegians have dispensed with their corspsepaint, the grim drawn-out passages of Death To Them All and Werewolf create an air of grimness that gets even harsher as the likes of Abattoir increase the tempo. The band’s obvious discontent with their sound also adds to a tempestuous, uncomfortable experience.

KAMPFAR [8] bring the first sense of ceremony, and with Dolk they have a frontman with such a powerful presence that half the crowd could consider quitting their jobs and following him to a battle at the ends of the Earth. Though they only play the feral Skavank off brilliant new album Profan, their sheer breadth of quality material is delivered in imperious style, with the anthemic Ravenheart and rousing finale of Our Hands, Our Legion all sounding triumphant.

The aura of spikes and spite mean** GORGOROTH [6]** still look and sound utterly convincing in their role as BM’s most fervent disciples, with Hoest doing his best to both physically intimidate and assault the senses with piercing vocals. Though purposefully uncompromising, in comparison to the multifaceted sounds on show tonight, the hellish riffs and unvarying tempos of Revelation Of Doom and Prayer that start off so menacing soon begin to lose their bite. Although the headliners are by no means forgettable, tonight’s thunder is usurped by their support.