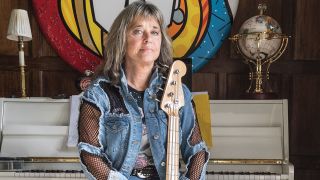 A trailer has been released for the upcoming Suzi Quatro documentary Suzi Q.

The Liam Firmager-directed film charts the 53 year career of the Detroit-born and UK-based vocalist, bassist and songwriter, who became the first female rocker to break into the mainstream in the 70s.

The film will go on general release from October 11, but prior to that, special previews and Q&A sessions with Quatro will take place across the UK from September 25.

Firmager says: “There is only one Suzi Quatro. She has sold 55 million records and still fills stadiums around the world. She was so influential but has yet to be recognised for her contribution to music.

“This film is an attempt to readdress that and introduce her to a new generation.”

Quatro released her latest album No Control in March this year through Steamhammer.

Suzi Quatro: No Control
Suzi Quatro released her 17th studio album No Control back in March this year. The record featured the singles Macho Man and No Soul/No Control.View Deal