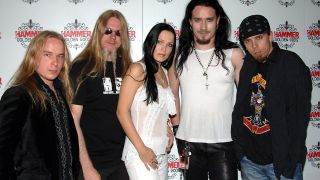 Nightwish have released a live video of their performance of Sleeping Sun from 2005.

The clip has been taken from the upcoming reissue of End Of An Era, which features vocalist Tarja Turunen.

The performance was captured at the Hartwall Arena in Helsinki, Finland, on October 21, 2005, which was the final show in support of their 2004 album Once – the band’s last record to feature Turunen.

A statement reads: “The DVD is set to give you goosebumps – yet it crowns the end of the Tarja chapter with a unique show that could hardly have been more spectacular.

“The setlist is stunning and contains 18 hymns such as the opening Dark Chest Of Wonders, Sleeping Sun, Nemo and Bless The Child, through to the final Wish I Had An Angel.

“If you do not already own this live masterpiece, you can now look forward to the extensive new edition.”

Nightwish previously released a clip of Nemo from the landmark performance, which can also be watched below.

Nightwish: End Of An Era
Nightwish's final show in support of their 2004 album Once is captured in this landmark live package – and is their last gig with vocalist Tarja Turunen.View Deal