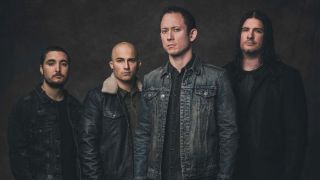 Trivium have become the latest band to postpone their touring plans in light of the coronavirus outbreak.

They were due to play shows this month in the Far East, but with concerns over the flu-like virus increasing, Matt Heafy and co. have been forced to shelve those plans.

Trivium say in a statement: “Due to circumstances outside of our control, we have been forced to postpone all of our tour dates in March in Japan, Singapore, Thailand and Indonesia.

“We also will not be making a scheduled press stop in Europe at this time. We hope to reschedule these dates very soon. Thanks, and stay safe.”

In addition organisers of the UK’s Hammerfest and HRH AOR have postponed this year’s festivals. Hammerfest was due to take place on March 19-22, while HRH AOR was scheduled for March 12-15.

Messages confirming their postponement have been posted on the websites, while emails have also been sent out.

Over the last 24 hours, Slipknot, Whitesnake, Sons Of Apollo and Michael Schenker have all postponed their upcoming shows due to the spread of the flu-like virus – also known as COVID-19.

Earlier this week, Lacuna Coil canceled a number of shows due the outbreak in their home region of Lombardy in the north of Italy.

The news came just days after Testament, Exodus and Death Angel were forced to pull the plug on their planned show at Milan’s Trezzo Live Club, after Italian authorities cancelled all public events in the area as a precautionary measure against the spread of the virus.

And last week, Green Day also put the brakes on their planned Asian tour, saying: “We know it sucks, as we were looking forward to seeing you all. But hold on to your tickets, we’ll be announcing the new dates very soon.”

The World Health Organisation have posted public advice in light of the spread of the virus which covers basic protective measures against coronavirus.