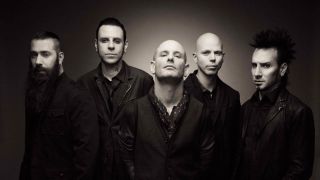 Update: Black Friday and Cyber Monday 2019 are fast approaching. Stay tuned for our pick of all the latest and best Black Friday music deals.

Stone Sour have confirmed their next covers EP will be released on Black Friday.

Straight Outta Burbank is the follow-up to this year’s Meanwhile In Burbank… set and, according to frontman Corey Taylor, is the second in what will be a trio of Burbank covers releases.

It features versions of songs by Bad Brains, Slayer, Motley Crue, Iron Maiden and the Rolling Stones and is out only on limited edition coloured vinyl November 27. Their cover of the Stones’ Gimme Shelter featuring Lzzy Hale has been made available to stream. Hear it below.

Frontman Corey Taylor says: “The first EP was a little closer together style-wise. This one hits a few different corners. It’s got Bad Brains on one end and the Stones on the other, with Crue, Slayer and Maiden in between – and the crazy thing is it all works. I hope people enjoy the spirit, music and fun that went into this.”

Guitarist Josh Rand adds: “To stay true to the original recordings of these songs, we tried to recreate the sounds and tones that the original artist used. This was both fun and challenging, but the end result was worth all the hard work everyone put in. I feel that with the diversity of the songs that the band has covered, it will definitely impact us on the next Stone Sour release.”

5: Seasons In The Abyss (Slayer cover)