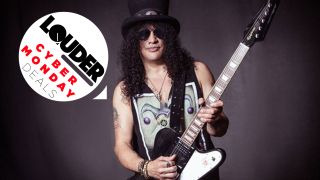 Slash has been responsible for many rock-lovers interest in picking up a guitar and giving it a whirl – who doesn't want to shred a Les Paul or double neck guitar like the Guns N' Roses lead guitarist?

The legendary riff-master is best known for his long-time affinity and partnership with Gibson – and his particular fondness for the Les Pauls – so it's only natural that he became the first global brand ambassador for the iconic guitar manufacturer back in 2017.

Slash then collaborated with Gibson's more budget-friendly subsidiary company, Epiphone, to produce a limited-run of guitars modelled on his signature Gibson Firebird – and this Cyber Monday, you could purchase one for yourself at a very affordable price!

With and original price tag of $1499, the Epiphone Limited Edition Slash Firebird Electric Guitar has had its cost reduced by a whopping $700 over at Sam Ash, which has now been discounted even further, making it a very appealing $599 – an absolute steal for such a well-built, attractive axe.

We can't promise it'll impart even a shred of the Rock and Roll Hall of Fame member's talent, but you will sure as hell look good wielding it.