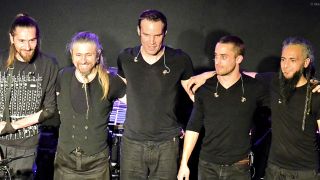 Lazuli have added a fifth date to their upcoming UK tour, sponsored by Prog.

The French five-piece already announced three shows in October and November, plus the date of a “secret show” in London.

Their UK return follows the launch of fifth album Tant Que L’Herbe Est Grasse last year, and an acclaimed run of shows with Moon Safari, voted among the top events of 2014 by Prog readers.

Former Pallas frontman Alan Reed will support on all dates.