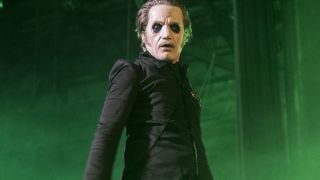 Ghost leader Tobias Forge says he is, for lack of a better term, a “devil-liking kind of guy.”

He made the comment during an interview with Sacramento's News Review, when he was asked if he was a Satanist.

Forge responds: “From a strictly Christian point of view, if that means believing in a physical, half-man, half-ram living in the underground, no, I don’t believe there is such a thing.

“But the concept of Satanism has many forms. In the last 50 years, ever since Anton LaVey and pop-cultural Satanism, when that rose in the latter of the part of 60s with the Church Of Satan and Black Sabbath, Black Widow and Coven and that hippie Satanism, which at the end of the day, heavy metal, black metal, all that is based upon that cultural Satanism, I grew up with that.

“So from that point of view, I would definitely say that culturally, I am definitely, for lack of better way of putting it, I’m a devil-liking kind of guy.

“But I wouldn’t sacrifice a baby to a half-ram that I believe to be living in the underground – and I would never ever encourage anyone to do that.”

Last week, Forge hinted that the band could release a new EP in 2019, saying: “My intention is not to release just another EP of covers.

"There might be something else coming out next year, maybe, that might have been recorded already, that won't be covers.”

Ghost are currently on tour across North America in support of their latest studio album Prequelle and will return to Europe next year.