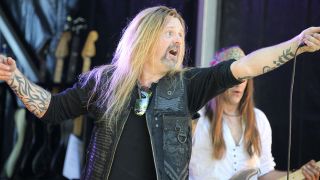 Former Shy and TNT frontman Tony Mills has died at the age of 57.

His wife Linda Mills confirmed the news on social media to say that the singer had died after being diagnosed with terminal pancreatic cancer in April this year.

The statement reads: “It is with a shattered heart that I announce the passing of my loving husband and best friend Tony Mills.

“He was diagnosed with terminal pancreatic cancer in April of this year and lived his life to the fullest until he exhaled for the last time in my arms. He wanted to live, but wasn't afraid of death.

“Most will know him through his incredible contribution to the music world as a singer in bands like Shy and TNT as well as a solo artist and session vocalist. He leaves behind him a legacy that will live on for many lifetimes.

“Those people closest to him will also know him as a gentle and kind soul, a dedicated husband with a love for the quiet life, his animals and his motorbikes. His sense of humour was always on point.

“His last summer was the happiest in his life, at the end of each day he exclaimed, ‘It's been another fantastic day!’ He spent a lot of time in his workshop fixing up his dirt bike so he could ride it later this autumn. The evening before he passed, he managed to whisper, ‘I’ve had a good life. I'm just a bit pissed about the bike.’”

Mills joined Shy in 1983 and appeared on their debut album Once Bitten… Twice… and was part of the lineup for 1987’s Excess All Areas which spawned the single Break Down The Walls, which was co-written by Don Doken.

Along with his work in Shy and TNT, Mills also release six solo albums, and contributed vocals for various other projects, including Docker’s Guild, Nergard, Serpentine and China Blue.

Soto and Sons Of Apollo vocalist Jeff Scott Soto has paid tribute to Mills, saying: “I knew this day was coming sooner than later. For anyone who knew of this kind, talented man, knows how much this one truly digs deep.

“I met Tony Mills back in 1985 or 86 when Shy were brought to LA by their label to collaborate on songs for a follow up album. I don't know if we ever did come up with something used or not but what I did get out of it was meeting an absolute gent, a humbled yet great singer who through the years we would send hellos until I heard he was ill.

“I regret not having more, especially recent communication with him, its typical of us to be too busy or not as available in our later years for so many reasons but the world that knew him and I will miss this one very much.”