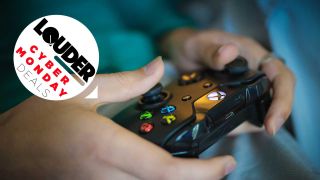 Christmas is officially here and the deals are coming in thick and fast from all corners of the web. And while there are savings galore on turntables, vinyl, instruments and bluetooth speakers, you may be looking to upgrade your games console or grab something now ahead of the Christmas rush.

Meanwhile, over at Very.co.uk, they've slashed the price on the Nintendo Switch Lite, which comes with Pokemon Sword and Minecraft. Meanwhile, Amazon are selling a 128GB memory card for the Switch right now for just £17.99 – down from £40.99!

In addition, there are deals on gaming accessories. Check out our pick of the bunch below.

Xbox One X Gears 5 bundle (1TB): now £299.99
Here’s a cracking deal on the Xbox One X, complete with one of the most visually stunning games of the generation, Gears 5 - the latest in the long-running franchise. They’ve also thrown in codes for Gears Of War 2, 3, and 4, a one-month trial of Xbox Game Pass and one-month of Xbox Live Gold.View Deal

Xbox One X: Forza Horizon 4 + Lego Speed Champions: now £299.99
Here's a fantastic deal for racing fans. Not only do you get the amazing Forza Horizon 4, but also the fun of Lego Speed Champions. And as if that wasn't enough, you'll also get a month of Xbox Live Gold and a one-month Xbox Game Pass, giving you access to some of the best games around. A saving of £100!
View Deal

Sony DualShock 4 V2: £29.99 with 6 months of Spotify Premium
Currys / PC World are offering this amazing deal right now on a range of PS4 DualShock controllers. Not only do they have multiple colours in stock, but they’re also throwing in a free six month Spotify Premium subscription.View Deal

Xbox One controller with 3 months of Xbox Games Pass Ultimate: Just £37.48
Just picked up an Xbox One X or S model and looking for a second controller? Well, you’re in luck as Amazon are selling one which comes with three months of Xbox Game Pass Ultimate! Game Pass gives you instant access to dozens of top games and is a great way build up your software collection,View Deal

XIBERIA Headset: now £24.99
There's a 50% saving on this gaming headset by XIBERIA. Compatible with Xbox, PlayStation, Nintendo Switch, PC and more, this set of cans boast Mic Soft Memory Earmuffs and come with Flexible Microphone Volume Control. With £25 off the RRP, what's not to like?View Deal

If you're in the US, there are also plenty of great Christmas deals to be found right now. Here's a look at some of our favourites.

Xbox One X: Jedi: Fallen Order: Was now $349
If you’re looking to get into 4K gaming and love Star Wars then there’s no better place to start than with this fantastic bundle. The pack also comes with one month of Xbox Live Gold, a one month trial of Xbox Game Pass and one month of EA Access.View Deal

Xbox One X 1TB NBA 2K20 Bundle: Was now $349
Get up close and personal with your favourites from the NBA with this bundle from Microsoft. Help lead the Raptors to another championship or resurrect the Lakers’ chances of another run at the trophy. The choice of teams and their destiny is in your hands.View Deal

Sony PlayStation VR Worlds Bundle: Was now $359.99
If you’ve never experience Virtual Reality before, then you’re in for a treat. It’s a truly incredible experience and the VR Worlds Bundle gives you everything you need to get started. As for games, there are plenty, but our favourites are Astro Bot Rescue Mission, Skyrim VR and No Man’s Sky.View Deal

Sony PlayStation 4 Pro 1TB: Was now $299
It’s a great time to upgrade your base PS4 for a shiny new PlayStation Pro. Enhanced visuals, faster frame rates and the luxury of 4K visuals – if you have the required TV, of course – make this essential if you want to boost your gaming enjoyment.View Deal

Nintendo Switch with Mario Kart 8: $299.99 at Best Buy
Mario Kart 8 Deluxe is an updated version of the hit Wii U game, with added bells and whistles. It's great with friends while the online campaign has loads of new stuff to unlock. And even though the Switch has a fabulous selection of games, Mario Kart 8 Deluxe remains one of the best.View Deal

Nintendo Switch with 128GB memory card and accessories pack: $334.97 at Best Buy
A great deal, especially with the inclusion of this meaty memory card. With the Switch only coming with 32GB of internal memory, an extra 128GB goes a long way. The accessories pack includes a carry case, screen cleaner, USB power cable, and Joy-Con cases.View Deal

PS4 DualShock 4, Green Camo: Was now $38.99
Replace that tired old DualShock 4 controller you’ve had for years with this eye-catching model. The green camouflage design makes this one really stand out – and it’s now available for a great price.View Deal

Xbox Gears 5 Kait Diaz Controller: Was now $54.99
Celebrate the latest instalment in the the Gears Of War franchise with this amazing limited edition controller. It has a brushed-style finish with blue and yellow highlights and even sports the COG logo. Grab in now and save $20.View Deal