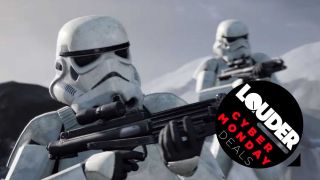 Disney+ is Disney's brand new streaming service. It doesn't arrive in The UK until next March, but had 10 million sign-ups in its first week, which either shows that people are prepared to pay for another streaming service – in addition to Netflix or Amazon Prime – or that Disney+ has the films they're after.

It could well be the latter: Not only does Disney+ have the entire run of Star Wars movies (Solo: A Star Wars Story will arrive in July), but 16 movies from the Marvel Cinematic Universe too, with more planned down the line. You can also look forward to exclusive new Marvel TV shows, which are apparently budgeted at an astonishing $25 million per episode.

Then there's all that historic Disney content – literally hundreds of classic movies, from the 1950s onwards – alongside programmes like The Simpsons and lots of original content.

Sound good? As part of this year's Cyber Monday Deals, US customers can get access to the channel for a year for $59.99, $10 cheaper than the regular price (which reverts to $69.99 thereafter).

Unfortunately the offer only extends to customers in the US and Puerto Rico, but Disney fans elsewhere can still sign up for a free seven-day trial.

Disney+ 12-month subscription | $59.99
You’ll find the budget-friendly Disney Plus to be a solid alternative to Amazon Prime, Netflix, Hulu, and now Apple TV Plus that will only improve as more content comes online.View Deal

Fender Play annual subscription: | Now: £49.99
Learn guitar at your own pace on your phone, tablet or computer with Fender Play. Save 50% with code fenderplayfifty. Plus, save 10% on Fender guitars, amps, pedals and accessories.View Deal

20% off all our music magazines!
If you really want to learn to play guitar, you need to subscribe to one of our guitar magazines, like Total Guitar, Guitar Techniques, Guitarist, Guitar World or Guitar Player. Alternatively, Classic Rock, Metal Hammer and Prog magazines have all the interviews with the biggest and best musicians in the world of rock. All subscriptions are discounted in this 20% off everything sale. Just use the code EVERYTHING20 at checkout.View Deal

Tidal music streaming: was £19.99 a month, now £1.99 for 4 months
If you've been intrigued to discover what high-end hi-res audio really sounds like, now's you're chance to find out. All the 24-bit/96kHz rock and metal (and everything else) you can eat for 1.6p a day.View Deal

Cyber Monday sales across the web