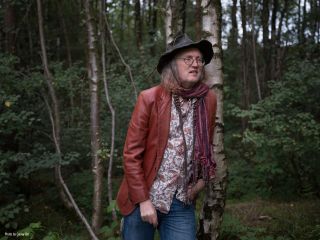 The Tangent release their new album, Proxy, through InsideOut Music tomorrow. It's made up of 5 tracks. It's the first album of the ten The Tangent have made where none of the songs crosses the 20 minute barrier, although 2 of the songs here make it past 16 mins - so into epic prog territory.

Here bandleader Andy Tillison gives us his personal take on each track.

The album's title track is a signature affair, a multi sectioned prog epic and sees the band on very familiar turf. A little more focussed on the core instruments of Hammond, Bass, Sax, Guitar and Drums than usual perhaps - less in the way of strings/orchestral sounds than on previous albums and the synths used are more Monophonic Minimoog type sounds than lush Prophet 5. Luke's sounding a bit more "Toni Iommi" than normal, Jonas is on distort, Steve Roberts (our new drummer) is sharp and tight and Theo is blowing full cheeks.  The vocal sections which kick in about 5 minutes after the song begins are a song of sadness at the insidious Proxy Wars going on in the world today where big powers, be they governments or weapons manufacturers play warlords in smaller countries yet absolve themselves of responsibility.

This is an instrumental written as a reflection on a motorcycle ride through southern Spain. It's another of the Tangent's jazz fusion tracks, highly inspired by Chick Corea/Return To Forever. It features a rare appearance of acoustic guitars largely absent from The Tangent's work since 2009, and of course these guitars are strongly "Spanish" in style. All the band get to show their chops on this one, but Luke Machin can be singled out as a stellar performer on this track. Jonas Reingold (bass) claims this to be on of the best three Tangent Tracks of all time and hopefully, he should know!

3. A Case Of Misplaced Optimism

This is a funky piece that developed from a soundcheck jam in Oberhausen in Germany. We approached this as (at first) an atmospheric synth pads piece for the verses, remaining as tasteful as possible. By the time we got to the choruses it was "what the hell, let's bring in the Earth Wind and Fire stuff" and the resulting song is our homage to the early days of Porcupine Tree and Jamiroquai all at the same time. It's a the first of two songs about missed opportunities, in the case of this song, personal choices and restrictions that we have impose on ourselves in our lifetimes...

This is the album's second "epic" track. Another multi-sectioned piece, once again with instrumental fireworks displays... but this time we are trying for some new ground. We decided to make this prog rock piece almost entirely out of a different set of influences. "The Adulthood Lie" is essentially made out of techniques, styles and sounds normally associated with Dance Music... electronic dance music to be more specific.  So - where "Proxy" is rooted in our normal influences base of Egg, Camel, ELP, Van Der Graaf Generator etc,  this piece is influenced more by Giorgio Moroder, Skrillex, The Prodigy, Fatboy Slim and Sophie Ellis Bextor - yet we tried to weave these together in the exact same way as we do with our normal palette.  The song deals with the sad way in which many of us (myself included) can get caught in the trap of believing that nothing is ever as good as it was when we were 17-21 years old. It highlights all the missed opportunities that occurred as a result of those feelings. So yes.. essentially, when the dance music boom arrived in the 90s, I was sitting there being snotty about it and saying those dreaded words "That's Not Music" - while in the meantime millions of 17-21 year olds were getting just as much of a kick out of it as I did out of prog 20 years earlier. We are daft sometimes. I reckon that as people who grew up loving the forward thinking of prog music, it's ironic that so many of us just want to hear the old songs...

And this continues that very theme..  This is a self-centred rant that originally appeared on a Tangent Fanclub release back in 2013. It was popular and we've often been asked to make it part of the official canon, so that's exactly what we did. It's a sarcastic look at my own generation, what we used to believe in and what we believe in now instead! It's a vibrant up-tempo rocker and it's a personal favourite of mine, but in the end it's over to the audience to determine!

Proxy is an album we have made to demonstrate our willingness to move with times, and out of our comfort zone.  It asks the same of the listener of course. This is what we think, after 15 years under this name, we should do.