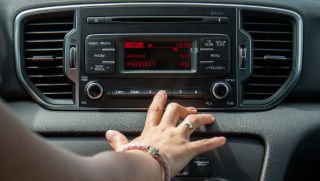 You’ve got to get your trainer tapping to a different song, you know I can’t do right for doing wrong.”

As The Wildhearts sang, radio, it would seem, can’t do right for doing wrong and particularly when it comes to rock music. As a presenter for more than 30 years, I lost count of the number of times I heard, "Why don’t you ever hear [insert band/artist here] on the radio?"

Nowadays you really can’t go blaming the presenter as 100% of the time he/she has no say in the music that is played. Unless they are in the fortunate position of presenting a ‘specialist’ show, presenters get a playlist on the screen in front of them and their job is to hit the green ‘Next’ button.

As far as music output goes, UK radio pretty much works like this:

BBC Radios 1 and 2 have Playlist Committees who sit, listen, look at You Tube, scan Twitter, Facebook etc before choosing what makes the hallowed ‘A, B or C’ list. (I won’t bore you with an explanation of the differences).

Then there is what is laughingly called ‘Independent Local Radio’ (ILR). Truly a misnomer, as both 'independence' and, in many cases, 'localness' no longer apply.

Instead, it is the media groups Global (all Capital and Heart stations), Bauer (long established stations in a number of cities, including the ludicrously branded ‘Rock FM’ in Preston, plus Kerrang and Planet Rock) and The Wireless Group (Prop. R. Murdoch Esq) who own almost every radio station in the UK.

For the past two decades, these Big Three Fish have swallowed up smaller radio stations and groups and therefore the choice of radio listening has lessened as the pool got smaller and the fish got bigger. In reality, the so-called ‘local’ stations are now just relays for national networked output and, due to merging and rebranding of local outlets, are pseudo-national stations.

The fact these groups are riding roughshod over the original ILR remit – which was to act as local alternatives to the national services run by the BBC – no longer seems to matter to the regulatory authorities.

So, what about the music?

Ah yes, well, it’s not about music. That is now only part of the ‘content mix’. Content is King and heads have rolled. Or at least Heads of Music have rolled to be replaced by ‘Group Content Controllers’. Their job description is fairly straightforward: keep people listening. Therefore, they tend to pick and stick with the most popular songs around and ensure the brand ‘sound’ is uniform across the group and therefore across the land.

Much like Maccie Dees, you will get the same sound burger in Glasgow as you do in Gateshead or Gloucester.

It is not within the remit of a Content Controller to ‘break’ new music. Instead he/she will list the 150 tunes PER WEEK that form the playlist for a ‘Hot AC’ station (target audience 15-24 age bracket). As each playlist runs within an ‘hourly clock’ of 12 songs, you can do the maths, and that is how we have arrived at mind-numbing, set-your-watch-by-it repetition.

‘AC’ (Adult Contemporary) stations aiming for an older audience (like the aforementioned R2 and counterpart indies) will have a bigger list of between 500-700 tracks to select from.

The playlists are selected using pretty much the same methods as the BBC along with that other important ingredient: ‘what is everybody else doing?’

Content Controllers are not paid, nor expected, to go out on a limb. Their purpose is to ensure that as an absolute minimum people do not touch that dial and shift it elsewhere away from their station.

I guarantee none of them has ever owned Reign In Blood or Highway To Hell.

Occasionally, the groups hire Market Research teams that specialise in the bleeding obvious and they survey a number of listeners to feed the relevant info back to the Content Controllers in an attempt to minimise any danger of having to express an opinion of their own.

Like all research, the answer is determined by the question asked. For example “Which of the following Ed Sheeran songs would you like to hear?" ensures another of red ‘ead’s angsty, anodyne aural assaults gets the airtime. There is little or no prospect of Slipknot or Sabbath ever making the list (then again, Radio 2 in one of its weirder moments…).

Safe? You betcha. But then, it not about music, remember. (Tip: if you are ever asked "Why do you want to work in radio?" never say, "Because I love music." Worst answer possible.) It’s all about the figures, especially the one in the right-hand corner on the bottom line for the ‘ILRs’.

The formula is: ‘Listeners + Advertisers = Revenue’. They are also known as ‘commercial radio’ for a reason. The Beeb, meanwhile, need the figures because, y’know, gotta help justify that license fee, right?

“But radio has a duty to play new music!” I'm afraid, it doesn’t. That’s the job of the industry, to find more ways to get their new acts out there in the public consciousness.

“But the presenter has a duty to their listeners!” Nope. People who sit behind the mic have a duty to do their job as instructed by the people who put them there. Not only are they told what to play but often they are also told what to say. Liner cards, promo scripts, automation and voice-tracking are the order of the day. Personality radio? For the birds, my friend.

In the same pecking order, the Content Controller is answerable to the boss/board that put him/her (usually him) there.

However, for those who say new music isn’t getting what it needs, that’s simply not true. There is more opportunity and availability than ever before with hundreds, if not thousands, of outlets via t’internet, you just have to go find it. So it’s not being spoon-fed to you anymore. So what? EVERY new band/artist has their own social media platform and all will be firing digital files to as many online outlets as they can shake a stick at.

Still desperate to be granted a piece of that oh-so-precious airtime? Be so good you can’t be ignored or, even better, it doesn’t matter and you smash it big time without the help of radio. Simple, eh?

Kevin McDempster is a veteran rock broadcaster and writer.