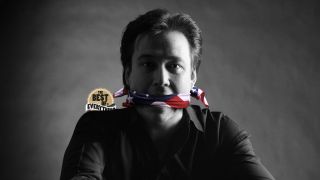 Ever since British stand-ups Rob Newman and David Baddiel headlined Wembley, comedy became widely regarded as the new rock ’n’ roll. But it wasn’t. It was stand-up comedy.

BILL HICKS
Hicks was considered a shaman, a prophet and the first rock star comedian by many. Adored by many early 90’s musicians, he was even immortalised on the inside sleeve of Tool’s Ænima album following his death in 1994. Hick’s swaggering, ferocious and highly articulate diatribes against everything from government regimes to the New Kids On The Block are the stuff of legend… come on, you already know this surely.
If He Was A Band He’d Be: Tool

STEVE HUGHES
Aussie Hughes is a man of pure heavy metal pedigree. He’s played in many thrash, death metal and grindcore bands over the years, including Slaughter Lord, Mortal Sin and Nazxul, and even claims to have invented the blastbeat whilst on tour with Napalm Death. His highly-politicised stand up comes from a similarly outsider attitude, railing against his perceived disgust at modern society in an unusually calm but hilariously cutting way. Watching Hughes stride onstage to the strains of Motörhead on prime time BBC1, much to the confusion of millions of Michael McIntyre fans across the country, was a true treat.
If He Was A Band He’d Be: Napalm Death

**ANDREW O’NEILL
**The cross dressing, occultist, black metaller is a unique voice and presence in UK comedy. His show Andrew O’Neill’s History Of Heavy Metal has been performed with a full band and celebrates the thrills, absurdities and legends of our genre. Plus, he plays in steampunk band The Men Who Will Not Be Blamed For Nothing, who were able to sell out London’s Highbury Garage with no label or press support. Funny as fuck, DIY as fuck.
If He Was A Band He’d Be: Watain

BRIAN POSEHN
Posehn’s odd, angry and geeky stand up led to him being the first comedian to be signed by Relapse Records. He’s performed at festivals all around the world, written the liner notes for Anthrax’s 2004 album, The Greater of Two Evils and recorded music with Scott Ian. Despite never compromising his love of metal to appeal to a bigger or cooler audience, he’s appeared in comedies such as The Wedding Singer, the TV show Californication and as a wedding minister in The Fantastic Four: Rise Of The Silver Surfer. For an overweight, thrash metal loving nerd, that’s some going. Brian Posehn is the metal musician’s comedian.
If He Was A Band He’d Be: Slayer

**JIM BREUER
**A man who has supported Metallica due to his uncanny onstage impersonations of Hetfield and Ulrich as well the entire line-up of AC/DC, Breuer was known to many in the early 90’s from his appearances on Saturday Night Live. In recent years, he’s found a new audience of metal and rock fans as his dexterous vocal cords can summon up what seems like an entire band on cue, as he playfully apes the ludicrous nature of a huge stadium rock show.
If He Was A Band He’d Be: AC/DC

**DOUG STANHOPE
**In the often regimented and pre-planned world of stand–up, where off the cuff quips may have been practised in front of a mirror time and time again, Doug Stanhope stands alone as a true original. A man who barely even looks like he could be bothered to change his underwear every other week, let alone write jokes, Stanhope is every inch the rock star comic. He famously phoned his terminally-ill mother live from the stage every night on a London run just to see the reaction of the crowd on the night that she might not answer. Drunk, belligerent and with a brutally sharp tongue, watching Stanhope live is as dangerous and unpredictable as any rock band you care to mention.
If He Were A Band He’d Be: Butthole Surfers

**JASON ROUSE
**Not just a massive metalhead, but the most profane and deliberately filthy man on this list. Rouse has made a career out of saying things that are unthinkable, let alone unsayable, and delivers it all with a big shit-eating grin on his face. It’s almost poetic to listen to the man wax lyrical on whatever ooze is doing the rounds in his twisted little mind that day. I guess that’s what a lifetime of listening to Slayer will do to you.
If He Were A Band He’d Be: Cannibal Corpse

**ANTHONY JESELNIK
**This Pittsburgh comedian deals in the sort of brutal one liners that will knock an audience sideways, gasp, applaud and then feel a sense of cheek-reddening shame. He’s destroyed Donald Trump on the Presidential candidate’s Comedy Central Roast, while his Netflix special, Thoughts And Prayers, will never be shown on TV. Look out for the story about his grandmother’s eulogy and offending the entire nation of New Zealand about a shark joke on his television show, The Jeselnik Offensive.
If He Was A Band He’d Be: Fantômas

BILL BAILEY
When Sonisphere booked a stand-up comic to headline the second stage just before the arrival of Slipknot in 2011, many would have been forgiven for thinking they’d gone mad. But, luckily, they’d booked Bill Bailey, a man that we recognise as one of our own so much that he was awarded the Spirit Of Hammer Award at the 2012 Golden Gods. Bailey, of course, is able to exist in the mainstream on shows such as QI, Never Mind The Buzzcocks and Black Books whilst still keeping both feet planted firmly in the rock world thanks to his stand-up shows that showcase his impressive musical ability. An ability that has seen him cover Enter Sandman on bike horns. Plus he bigs up Mastodon almost every time he gets interviewed. Good lad.
If He Was A Band He’d Be: Iron Maiden

**GLENN WOOL
**Canadian slacker Wool is yet another on this list whose dual loves of heavy music and excess have cemented his place in the hearts of rock and metal fans. Wool’s lackadaisical, stoner persona and flights of fancy on his booze and drug-crazed lifestyle are absurdly funny, and would doubtless be massively confusing to your average Jimmy Carr fan. The man is a walking, much more articulate, episode of Beavis And Butthead, also the fact that Wool looks like he should be playing bass of Lynyrd Skynyrd helps… both for his comedy and with his bond with rock fans.
If He Was A Band He’d Be: Monster Magnet

NICK HELM
A deafening mess of a man, Helm recently picked up a British Comedy Award for breakthrough artist. You’d never have thought it was possible if you’d spent long enough experiencing his ramshackle stand up sets, where he often enters to Saxon, spends half the set screaming about how he’s the greatest human alive before it all descends into chaos and we are left with a bitter, angry shell. Helm also performs with his backing band The Helmettes, singing songs of similar empty bravado. One of the funniest car crashes around.
If He Was A Band He’d Be: Guns ‘N’ Roses