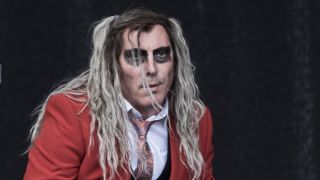 As 2019 barrels into view, it looks like the world will finally get to hear the follow-up to Tool's 10,000 Days - well, maybe. While we wait on the edge of our seats, here are 10 overlooked classics from Maynard and co that might’ve slipped through the cracks of your brain the first time round…

We’ll discuss other Lateralus gems later on, but the band’s third album is bolstered early on by The Patient’s inclusion. Adam Jones carefully picks his guitar strings while Danny Carey taps the cymbals ever so gently, as if cranking up the volume will wake Mum up on his way home from a house party. Justin Chancellor’s thickened bass squeezes through the door and Maynard James Keenan’s inherently weird vocals ride atop everything, up the stairs. Mum starts to stir. “And I’m still right heeeeere,” declares Keenan, prompting the band into full-on electric mode; Carey realises all hope’s lost as Mum stomps into the corridor and readies to talk his ear off, so he blasts out some sluggish double-bass in a manner that eschews brutality and somehow manages to sound ethereal. Mum lets him off because she realises he’s an actual god behind the kit and can do sweet flams and everything.

Even on their debut full-length Undertow, Tool still sounded like no one else other than Tool. Jones’ sitar delivers 4° in a slightly less ham-fisted way than Soulfly would go on to try, Keenan’s lower vocals through the verses then juxtaposing his soaring efforts in the chorus. It’s a mid-tempo stomper that benefits from that quiet/loud dynamic so commonly associated with the grunge acts around the time, but done in a way that separates Tool from all those bands. Keenan’s grumbling followed by that drum roll at 4:40? How Jones’ solo near the end almost brings you back to the atmosphere evoked by the sitar at the beginning? A bit good.

Cut just over halfway through second LP Ænima, Jimmy begins with an almost Southern metal riff – the kind Ministry would have pumped full of meth and blasted into someone’s anus had they got their hands on it for Psalm 69 four years prior. It’s a muscular outing in an instrumental sense, but Keenan’s delicate delivery through certain passages really hits home; this is a band of immense power yet somehow Keenan makes Jimmy sound like a naked confessional, right before that wavering yell at 3:40 smacks you in the chops.

Ending Ænima with a fourteen-minute-long song isn’t how you’d expect a triple platinum-selling record to go out, but that’s just Tool. Late comedian and friend of the band Bill Hicks is sampled throughout the piece, the album itself a dedication to his maverick talent. Even when you’re nine minutes through this sweeping epic, Keenan’s static-laden scream of “Prying open my third eye!” is yet another left-field move on the band’s behalf, crunching everything down into a metallic assault before returning to the track’s original ebb and flow… and then back into hulking, percussively primal metal towards the climax, leaving Ænima’s climax languishing in a nigh on industrial pool of slime.

Some will have you believe that 10,000 Days is the worst Tool album. They’d be wrong – there simply isn’t a worst Tool album. It’s just not a thing. Everything about this album, conceptually and musically, is up there with Tool’s finest; Right In Two is a contender for the record’s strongest track. Like most of Tool’s finest songs, it builds from a serenely picked intro into a crushing crescendo of thickened, bass-heavy metal riffs that make Mastodon sound like Take That; brain-humping fills follow a ludicrous tabla solo from Carey and, as usual, Keenan’s on impeccable form. Right In Two fades back into that fragile, cleanly picked mode before seguing into the record’s final, eerie soundscape of Viginti Tres. That ending couplet is presently Tool’s recorded parting shot; if they never get round to releasing album number five, what a way to go out, eh?

The volume knobs crank from 0-11 through Triad’s introduction, Carey’s percussive punishment aligning with Chancellor’s rumbling bass and the spiked guitarwork of Jones, reeling over and over, testing the patience of casual listeners. When the dam bursts just before the three-minute-mark and that riff screams in at 4:05, you think you’re heading into the heaviest of territory. You wait for the assault, the sonic flagellation. And it doesn’t really come; Triad heads back into heavier territory towards its latter half, but more than anything it’s testament to Tool’s talent as an instrumental unit. Keenan is absent and the band’s repetition is counteracted by their sheer dexterity, conjuring an atmosphere and weight akin to industrial metal but without the – for want of a better word – basic nature of that genre.

Opening Tool’s first proper EP Opiate – no, we’re not counting 72826 – Sweat is a gloriously brief snapshot of the band’s early years and ambitions. The bass is rumblier than Primus being starved on a school trip and Keenan is an absolute force, even in the band’s preliminary, more straightforward alternative rock incarnation. And when you get to that crunch… mate. Carey’s double-bass isn’t just a Dave Lombardo impersonation, almost slowing it down to make sure every note kicks you right between the cheeks. Yeah, it’s not exactly Ticks & Leaches, but the fact that Tool crammed so much stuff into three-and-a-half minutes while still hanging it off Keenan’s vocal hooks and making it all so cohesive? Magic.

An absolute diamond from Undertow, this one. Jones’ opening riff is one of hope; an upbeat, sharply picked intro that soon slams you into the full band going at it like only Tool can. Crawl Away’s a winner from the off, but it gets even better as they pick up the pace and Jones releases a twelve-second flurry of notes atop the pounding beat from 3:56. Like, seriously. Come on. This 12 seconds is of higher quality than most tracks bands spaff out over their entire careers. Keenan lets himself go towards the end but he knows he’s already won; three years into their journey and on their debut album, Tool were already pretty much the best band ever.

Sandwiched between Stinkfist and H. on Ænima, Eulogy could easily be forgotten by the half-arsed listener. But it shouldn’t. Because it’s brilliant. The clinking intro lasts for nearly two minutes before the full band comes together to drive that monster of a riff beside Keenan’s distorted vocals. There are so many moments to be gorged upon here; Jones’ isolated riff at 4:45; the dread-filled, sadistic string-scraping; that “Don’t you step out of line!” section followed by that meaty riff; Carey’s three-pattern hi-hat hits over that basic beat at 6:35; oh, that final shout from Keenan, too. Eulogy could’ve been dissected and patched into three or four different songs, but Tool’s quality control is, as expected, too high to even consider such shoddy copy-and-pasting.

“HOPE THIS IS WHAT YOU WANTED! HOPE THIS IS WHAT YOU HAD IN MIND!” If you know it, you know it. If you don’t, well, now’s your time to rectify that. Ticks & Leeches reaps fair praise from Tool’s rabid fanbase but it’s here just on the off-chance that you’ve not discovered it yet; a high point of innumerable 10⁄10 tracks on Lateralus, this is arguably one of Tool’s ultimate works. Everything about it; the elusive ghost notes Carey dispenses through the intro; the elaborately crafted, subdued mid-section; and Keenan’s unhinged, throat-lacerating scream of, “SUUUUUUCK! SUCK ME DRY!” is a genuinely draining experience as a listener. When Ticks & Leeches hurls into its final bout of bone-snapping brutality, you’ll laugh. You’ll cry. You’ll go and tell all your mates and force them to listen to it just so you can talk about it with them, because you’ve just heard four of the greatest musicians on the planet uniting to create out one of the most gorgeous pieces of music you’ll ever be lucky enough to hear.