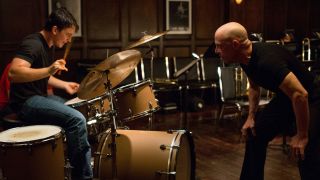 So I watched Whiplash, but before we get into the film, I wanted to tell you my story. I’ve told people different little bits and pieces, but here it is.

It was 1994. I was in a band – a sappy band going nowhere – called Sylvia. A bad Jane’s Addiction rip-off band. I was still finding my way and working in a music store. There was this guy who told me his friend was a musical director for this chick from Canada called Sass Jordan. I’d kind of heard her on the radio a little bit. I listened to classic rock radio when I was a kid, but in the 80s, they’d play new music. People like Stevie Ray Vaughan and shit like that. This girl had had a few minor hits. They were going on tour in Europe and were opening for Aerosmith. They needed a drummer. I was like, ‘Fuck! I’ll do that!’ Even if I never do anything else…

I talked to this cat on the phone, a guy called Stevie Salas. This guy is her musical director. He helped her produce her record and played with Rod Stewart when he was a kid. He had his own band, Colorcode. He’s been around the block and I’ve been nowhere… twice! I bought the CD and it was blues rock. Kinda like Black Crowes with a chick singer. They were going to Europe and I would’ve eventually got fired from this job at the music store. So I learned the songs. At this point, you’ve got to realise that I grew up in a surf town in Orange County, California. I’d been to LA three or four times in my life. I wanted to get this gig and at that moment, I had a stupid confidence. I thought I was the best drummer in the world. I really did. A lot of people said I was great all the time. And those who didn’t, I thought they were just stupid. That was just bravado.

I went there thinking I already had the gig, so I was going to show them how fast I could play the drums. I blasted through a couple of songs. Stevie Salas stopped me and said, “Hey. Did you listen to the tempo of these songs?” I was like, “Yeah! I know all of them”. But he told me I didn’t know them. He took me outside and told me to listen to the music and think about the way it was played and the tempo, and to not play drum solos. He gave me another chance, so I went back to my parents’ house for a week and studied the songs a little bit. I got what he said – a little bit.

A week later, we played through the songs and he wasn’t happy. He said I wasn’t ready for this gig, but, he said he saw something in me and gave me the job. He said, “I’m going to bust your fucking ass”, but I didn’t care. I was going to Europe. $375 a week, a bunk on a bus and trip to Europe. But that following month in rehearsals, he wore me out. There’d be times when I wasn’t sure if I’d be coming back the next day. He’d be like, “too fast!” or “too slow”, just like the teacher guy in Whiplash. It was intense.

A month before we went on tour, I was in a garage playing. Then I was out on stage in front of thousands of people, on the same stage that Aerosmith would be on in a couple of hours. Stevie Salas would be screaming in my face during the shows, “This ain’t no high school gig!” and would tell me he thought I should probably go home. He tortured me! Fucking tortured me! For six months. And I still love him. He’ll always be one of my mentors, like Dave [Grohl]. He was the one guy who beat it into my brain that I wasn’t the best drummer in the world, that I have work to do. But he said I had something that couldn’t be taught. A lot of it has been luck – being at the right place at the right time – and hard work. He ripped my ego out of my body and put it back the way it should have been. I still talk to him every couple of months. He comes to shows and I’ll get nervous.

I think that’s the point of that movie. You’ve got to have someone pushing you. If you think everything’s great, then you’re not going to push yourself.

Nowadays, kids are raised differently to our parents. My dad grew up in a time when eating was the most important thing of the day. He looked at us like we were soft. The thing is, people will say the teacher [JK Simmons] is a bald motherfucker and pushed him too hard and he was mean. But everyone wants everything easy. I want everything easy! Kids want to open up a computer and have everything sitting there for them.

Now, by telling you my story, I don’t want people to think I’m a mean old man. “These kids today don’t know what hard work is…” I know there are kids who work harder than I ever will. But Whiplash was a good story and a good reminder that there’s always someone around the corner who’s trying to do what you do and nothing good should come easily.

What did I think of the playing in the film? There’s no way the actor [Miles Teller] was playing those drums for real. I think he did a good job of syncing his playing. He looked like he could be a drummer, but the way he was playing looked like he would’ve played for a band like… The Strokes, who I love, totally. I could be wrong, but jazz drummers have a certain thing going on. I’m not really a jazz guy. I’ve gone into the fusion world a few times but I enjoy it on a level.

His character, Andrew, was very driven. Did I have the same drive as the young jazz drummer when I was younger? No, not the same. His passion and dedication was one of the things I found interesting about the film. Jazz players are really into it for the music. I had friends who were amazing surfers or amazing athletes. I didn’t have any of that. Then I found drums and connected with them right away. Music touched me emotionally when I was young and I love rock ’n’ roll. But do I think about drums all the time? Fuck no!

So I’ll give Whiplash a 10. It had music, a little romance, some fighting and incredible drumming. Go see it.

Whiplash is out in the UK on January 16.