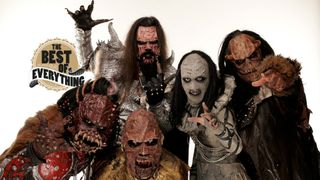 If there’s one person who knows his stuff when it comes to monstrous metal and shocking rock, it’s the fiend from Finland himself, Mr Lordi.

“My shock rock obsession began in 1979 when I went through my cousin’s music magazines and saw this dude in a spider costume - that was Alice Cooper,” he says. “I didn’t get the rock part yet, but I definitely got the shock! Here are my top 10 shock rock anthems – keep it spooky.”

Mechanical Animals was the thing for me because it was a lot more melodic rock and it wasn’t so noisy. I’m not a massive Marilyn Manson fan because he’s a little too punk for me nowadays, but I tip my hat to him for his whole creepy concept.

I loved Rob Zombie’s work during the White Zombie days, I’d seen them live a few times. His first two solo albums Hellbilly Deluxe and Sinister Urge are great, but I’ve never seen Rob solo live. He never comes to Finland, he’s booked so many times but he always cancels on us!

I love their unpredictable satanic vibe, I didn’t realise it was a gimmick. How could anyone make a more brutal concept than them? I love costumed bands but Venom are these balding middle-aged dudes – Conrad Lant [Cronos] looks like a demon troll even without make-up so that works for me!

People don’t remember this band well enough. They put on such cool shows and they still do today, they really get under your skin. I think Lizzy Borden and what they do is the most complete package of what I want to see and hear from rock meeting horror, their whole style is incredible.

If you think about the song properly, it’s about zombies and the video shows a high school full of them. Tom Savini, the great 80s splatter SFX guy, was doing the whole show for that music video. If that’s not shock rock and horror, I don’t know what is!

People only remember their silly happy songs, but they’re freaky and came up with scary shit like Destroyer, Captain Howdy and Burn In Hell. Let’s face it, Dee Snider in full gear is one scary motherfucker! They became so mainstream in the 80s, so many people forget their horrific side.

I remember their promo pics with half-naked chicks and [they were] drinking blood – that’s shock rock in capital letters! Those first two albums were totally cool shit when I first heard them. W.A.S.P. are the essence of 1980s shock rock and you just can’t get better than Blackie Lawless.

King Diamond is the shit! The Family Ghost was my first King encounter and it blew me away. King has this whole strange aura in his recordings, even if you don’t know his satanic influences, somehow it comes through your speakers. He makes you question if you should be listening to him!

I’m a massive 80s Alice fan. Gail is my favourite horror song, it’s like a ballad but I love the lyrics and its amazing production. Every Cooper album has a shiny diamond like Might As Well Be On Mars, but every so often there’s an even better one like Gail.

My favourite song of all time! Destroyer was my first rock album and I have the cover tattooed. Without that, I wouldn’t be writing this now. It’s powerful and spooky with the kids shouting, I knew this was demonic shit when I first heard it. It’s even Lordi’s intro tape!

Lordi’s new album Monstereophonic is out now. The band’s UK and Irish tour starts on November 9 at Dublin’s Button Factory.

The Metal Hammer Halloween Quiz: how well do you know metal’s creepiest bands?