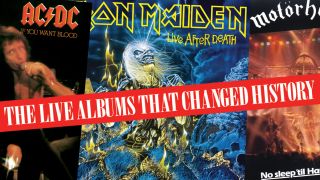 If the early 70s was the dawn of the live album thanks to classic LPs from Cream, The Who, the Rolling Stones and Deep Purple, and the mid-70s was when they became part of the rock landscape courtesy of Kiss, Led Zeppelin and more, then the late 1970s and early 1980s was a time when the live album ruled the earth – Thin Lizzy’s Live And Dangerous, AC/DC’s If You Want Blood You’ve Got It, Iron Maiden’s Live After Death… the list goes on.

The live album died off as a commercial force soon afterwards, viewed as a relic of a different age. But as part three of our look at the greatest live albums ever made proves, quality lasts…

Although producer Tony Visconti later claimed that 75 per cent of Live And Dangerous was recreated after the fact in the studio, as someone who was at one of the shows I can assure you that the album is an accurate representation of the classic Lynott-Robbo-Gorham-Downey line-up at the peak of their powers.

It does what all truly great live albums do: delivers even better performances of stone-cold studio classics. Best of all, it conveys the sense – palpable at the shows – of what those guys were really like to be in the same room with. There must have been 50 people hanging out on either side of the stage, everyone from George Best to various Page 3 girls, TV celebs, groupies and drug dealers, all spilling on to the stage at various moments. You can’t see it on the record, but you can hear the fun, feel the crackle. Mick Wall

Apart from setting a landmark example of how a great live album can inject life into a band’s slightly flagging fortunes, Cheap Trick At Budokan quite simply sounded better than any live album before it, or, for that matter, since.

Masterfully straddling the delicate divide between tight and loose, the band power-drive through pop-rock classic after pop-rock classic, grinding bass marrying swinging drums, while Robin Zander’s vocals glide effortlessly to the kind of stratospheric heights that have threatened voluntary redundancy of many a lesser vocalist, leaving Rick Nielsen’s fluid yet throwaway guitar licks to command the court jester’s spot, front of stage. Mixed with the fevered squeal of the Japanese audience, this thrill ride begs continuous participation from the captive listener.

I’ve heard tell that this album was actually recorded in Osaka, the night before their fabled Budokan show. This matters not. For me this is a live document of a supreme band in their absolute prime, and a bar raiser for any young hopefuls left gasping in its wake.

It’s okay not to be as good as Cheap Trick (hell, who is?), but if you want to play catchy-as-hell rock’n’roll then this album taught you to up your game, to go hard or go home. Stiff competition indeed.

Rick Nielsen (Cheap Trick guitarist): “In 1978 we were bigger in Japan than in America. The idea was to record a live album for the Japanese market. The Beatles said they couldn’t hear themselves at Shea Stadium because the hysteria was so enormous? After these gigs we know how they felt. The noise was unbelievable.

“We never expected it to come out in America, but import copies sold well enough for our label to think it was worth releasing properly. We thought: ‘That’ll be a few more sales.’ But it turned us from being virtual unknowns in our own country to being big stars. Thank you, Japan.”

Tom Russell (rock DJ): “I first saw AC/DC at the City Halls in Glasgow. When they returned, to the Apollo, their popularity had gone up so much they sold out the venue. I managed to blag a ticket and got to meet them backstage beforehand. They were so modest. Bon I loved straight off. He was the same of stage as on, which was part of the band’s charm. And that night the atmosphere was incredible. When Glasgow takes a band to heart, gigs become magical.

“For me, highlights include seeing Bon carrying Angus up to the balcony while he played a solo, the chants of “Angus! Angus!” during Whole Lotta Rosie – that was the gig where this started – and the band wearing Scotland football strips and kicking balls into the audience during the encore.

“This gig summed up what made AC/DC so special live – the energy, the rapport with the crowd and the way those simple yet classic songs took on another life. You hear all of this on If You Want Blood. It’s a great reminder of how remarkable the band and their fans were that night.”

Iron Maiden’s Steve Harris knows a thing or two about live albums. Maiden have made eleven of them – including the legendary Live After Death from 1985. And Harris has no doubt about what is the greatest live album ever made. “UFO are one of my favourite bands,” he says. “And Strangers In The Night is my favourite live album. Some albums get boring, but I’m still listening to Strangers.”

In fact, Maiden have for many years used a track from this album, Doctor Doctor, as the intro at their own shows. Released in 1979, Strangers In The Night was the final act of UFO’s golden years. Just before the album was released, guitarist Michael Schenker quit the band. But his performances were stunning. Everyone in the band was at the top of their game. And across this double album are so many great tracks: Natural Thing, Only You Can Rock Me, Lights Out, This Kid’s, Rock Bottom, Doctor Doctor and arguably best of all, the Zeppelin-sized epic Love To Love.

Compared to the modern-day, turbocharged Whitesnake, Live… In the Heart Of The City comes as a shock. There are precious few histrionics and not a single wang-bar workout. Rather, the fist-in-your-face hard-sell of the current band is replaced by a soft susurration; David Coverdale and his blues-laden crew simply roll nonchalantly into town, crack their knuckles… and play. With an elegant, loping grace.

Gigs by the early Whitesnake were near-religious experiences, and this album captures the intimate live ambience of the ‘classic’ line-up. Coverdale manages to be both imperious and humble at the same time, his golden voice at its rich, sonorous best.

Indeed, given the criticism levelled at the frontman’s vocals in recent years, this could be regarded as something of a bitter-sweet album. A reminder of simpler, more understated times when the thrust came not from the mic stand but from deep down in them there lungs. Geoff Barton

David Coverdale (Whitesnake): “I always felt we were a people’s band. We were definitely connected to our crowd, and we never really bothered if we were cool or not. It was a great ‘bunch of blokes’ band, a kind of Faces band. We were sent on some silly promotional stunt for the album that involved a circus elephant – yes, an elephant, not a snake – Lord knows why. While we were waiting around, shuffling our feet, the photographer suggested I should mount the poor animal. Me, being pretty hungover, remarked: ‘I’d rather mount that,’ and I pointed to the girl in the sparkly circus suit who was the elephant’s trainer. We were pretty much always hungover in those days.”

No Sleep… was a double-edged sword for Motörhead. Hitting No.1 in its first week of release, the band would never be able to follow it up adequately. Lemmy came to regard it as an albatross around his neck. Which is a pity, because it’s a landmarkalbum.

Recorded in March 1981, it arrived at the height of the NWOBHM movement yet it had just as much in common with the punk scene. It made friends wherever people snorted speed or liked to smash things up; more importantly, it summed up a moment in time, an attitude – you didn’t have to be a Motörhead fan, or even a rock fan, to connect with. All of which made No Sleep more than just a great live album; it made it a cultural high-water mark – even for those who have never heard it. MW

Pieced together from stop-offs on 1983’s War tour – including their game-changing set at Red Rocks – Under A Blood Red Sky was a shot in the arm for the live album format as its golden age began to dip. Its release felt like a pivotal moment; the livealbum was still the calling card of the rock behemoths, and not to be meddled with by rag-tag members of the post-punk underclass. But U2 had grown up eyeing the bands behind the great ones – Bono has cited the impact of Thin Lizzy’s Live And Dangerous – and here they hijacked the format on such sky-scraping moments as I Will Follow and The Electric Co. (the latter costing them $50,000 after Bono dropped in an unauthorised snippet of Stephen Sondheim’s Send In The Clowns).

It worked, too: Under A Blood Red Sky enjoyed monster sales, woke up America and reignited the live album as a commercial proposition. The future would hold giant lemons, Salman Rushdie cameos and the sheer ubiquity of Bono, but this album is the sound of a flesh-and-blood live band who didn’t need gimmicks to own a stadium. Remember them this way. HY

By the time Iron Maiden’s World Slavery tour reached Long Beach Arena in Los Angeles in the spring of 1985, it had grown from a purposeful attempt to conquer the world into a bona fide victory march. Barely five years had passed since the band were breathing punters’ beer burps at the Ruskin Arms in London, but both the band’s confidence and the scale and ambition of their live shows had grown exponentially.

Live After Death is very much the snapshot of a young band at their peak, but it was also a cocksure riposte to the Purple, UFO and Priest live albums that had provided Maiden with a blueprint to emulate and then surpass. And With the advent of CDs just around the corner, Live After Death – with its gatefold sleeve, complete with highly detailed breakdown of the World Slavery Tour’s tech specs and logistics – was the last great live album of the vinyl era. Dave Ling

Bruce Dickinson (Iron Maiden): “The whole thing should’ve been from Hammersmith. The performances there were better than the ones in Los Angeles, but the lighting engineer, Dave Lights, was at war with the video guys and consequently the whole thing was too dark. So we had great audio footage, but a lot of the concert footage was unusable.”