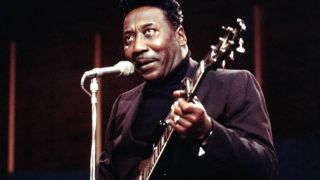 Chicago in the 1950s was not acircuit for the faint-hearted. To venture into the blues dives that dotted the city’s South Side was to enter a hard, violent, visceral subculture, epitomised by the episode in Buddy Guy’s memoirs where a murderous barfly arrived at a club holding his wife’s severed head. If the punters weren’t intimidating enough, the competition was. On any given night, at any given bar, you’d have found a jobbing legend, from Otis Rush and Magic Sam to white-boy interlopers like Paul Butterfield and Mike Bloomfield. Always on the prowl, meanwhile, was the big, bad Howlin’ Wolf.

Yet Muddy Waters was the kingpin. Born in Mississippi as McKinley Morganfield, the young bluesman was recorded for the first time during a 1941 visit by field archivist Alan Lomax, and rode the confidence from that first pressing into amove north to Chicago.

Brought aboard the nascent label of Leonard and Phil Chess – and backed by a band that included harpist Little Walter and piano man Otis Spann – the early-50s saw Muddy fire off the songs that remain standards. Mannish Boy, Hoochie Coochie Man, Got My Mojo Workin’, I Just Wanna Make Love To You: all were delivered with afruity baritone, lashings of revolutionary electric slide and asoupçonof justified arrogance.

Even so, Muddy’s imperious run was starting to falter before he was championed by the fanboys on the far side of the Atlantic. In 1958, he was brought over by jazz man Chris Barber, and the amplified thump of those performances proved the starting-pistol for the British boom, galvanising Alexis Korner and Cyril Davies to start London’s R&B scene, and mobilising upstarts fromEric Clapton to the Rolling Stones (even their band name was lifted from Waters’ 1950 single).

Muddy didn’t always excel (witness the honking psych-rock of 1968’s Electric Mud), but he always endured. After the fall of Chess, the patronage of those younger rockers kept him afloat, with 1977’s Johnny Winter-produced Hard Again proving one of his very best. Even today, decades after his 1983 death from a heart attack, those formidable ripples continue to spread. “At the end of the day,” notes Joe Bonamassa, “there’s only one Muddy Waters.”

He’d always been the king of Chicago, but July 3, 1960, marked the moment when Muddy ram-raided the mainstream, bursting off the sweatbox circuit to play aSunday afternoon festival set for a pack of white hipsters.

Released the same year, this live album caught the lightning in the bottle. Backed by an all-star band (James Cotton, Otis Spann et al), Muddy embraces the frontman role, ditching his guitar and setting to work on the crowd with that industrial-strength croon and charisma. Chess-era belters like I Got My Brand On You, Hoochie Coochie Man and Got My Mojo Workin’ (played twice, for good measure) had never sounded so neck-tingling.

Prescribing a compilation might seem like a cop-out, but assuming you don’t want to spend the next decade hunting down vintage 45s, this three-hour, 75-song set is the best way to own the Mud’s vital Chess sides.

Back in the 50s, these songs were literally electrifying, dragging the country porch blues of yore in an edgy, amplified, big-city direction, and while Willie Dixon’s pen was behind many of the best (Hoochie Coochie Man, I Just Wanna Make Love To You, etc), it was Waters’ musical charisma that sold them. Today, in an era of fluff and bubblegum, there’s a musical substance and emotional heft here that still has the power to pull you up short.

If you only know Mud as the megawatt electric warrior, these raw acoustic field recordings – taken by blues folklorist Alan Lomax in 1941 – reveal another fascinating side to the coin. The best moments find Muddy on his lonesome, stripped to the bones of his talent, positively oozing future greatness in the rattled attack of his slide work, the emerging voicebox and the proto versions of future Chess hits like I Can’t Be Satisfied.

That Lomax’s recordings ended up in the Library Of Congress says it all: they’re a perfect snapshot of American music.

The reissues market is flooded with ‘twofers’, but this is the set you need, splicing two classic albums from 1960 and 1964. Big Bill finds the Mud on reverential but raucous form, covering the catalogue of Big Bill Broonzy and knocking cuts like Mopper’s Blues out of the park. On the surface, the all-acoustic Folk Singer is less exciting, until you hear the mournful scuttle of My Home Is In The Delta (with a guesting Buddy Guy) and the belief-beggering solo spot Feel Like Going Home – all captured with a crystalline production that prioritises the big man’s mahogany voicebox.

Mike Bloomfield set the ball rolling – telling Marshall Chess he “wanted to do a thing with Muddy” – and this all-star project took flight from there.

In April 1969, heavy-hitters including Paul Butterfield, his drummer Sam Lay and Booker T bassist Donald ‘Duck’ Dunn convened in Chicago for a three-night recording session, at which Muddy quaffed champagne and sang himself “stone hoarse” on aselection of lesser-known gems.

The studio cuts are matched by the live material – recorded in the same period – which finds a crack band taking Muddy’s catalogue to the masses.

By the mid-70s, Muddy was a relic on the ropes, watching the once-proud Chess Records absorbed into a reissues label, then leaving the roster to kick his heels. Redemption came in the form of producer Johnny Winter, who marshalled the troops (James Cotton, pianist Pinetop Perkins and drummer Willie ‘Big Eyes’ Smith were all onboard) and coaxed out the kind of performances the bluesman hadn’t given in years.

Both the pace and standard were set by the opening ‘whoa yeah!’ of Mannish Boy, and Hard Again kept it up, giving us languid gems like Bus Driver and the rollicking I Can’t Be Satisfied.

Deep into his 60s, Muddy could still hit a stage like a wrecking ball. This live collection isn’t quite up to the lofty standards of Newport, but the old warhorse hollers up a storm on She’s Nineteen Years Old and Nine Below Zero, while his slide work has rarely been caught on fierier form.

Suffice to say that though Johnny Winter pops up on guitar, he never wrestles the spotlight from a vintage performer patently relishing his late-bloom. The rubber-stamp on his comeback came the following year, when the album scored a Grammy for Best Ethnic or Traditional Recording.

Decamping to the British capital to record with his acolytes had done good business for Howlin’ Wolf in 1970, so why shouldn’t it work for another Chicago star? Mysteriously, Muddy doesn’t seem to have the Wolf’s pulling-power: instead of the Stones and Clapton, he gets Steve Winwood, Rick Grech and Mitch Mitchell.

And yet, for blues-rock connoisseurs, the London Sessions has to be heard, if only for the blow-the-doors-off guitar work of Rory Gallagher: the one bandmember who seems to grasp the brief, lock horns with the Delta don and blow these sessions skywards.

With Johnny Winter updating his sound, Muddy’s hot streak continued with 1978’s I’m Ready, but it was pipped by this 1981 swansong. By now, the bandleader was in physical decline, probably explaining why the sessions were fast and fractious (recording would be derailed by a salary dispute).

Though Winter reportedly wasn’t happy with the results, the album has aged well, especially on cuts like Champagne & Reefer and the joyful bounce of (My Eyes) Keep Me In Trouble. Peaking at No.192 in the US charts, King Bee wasn’t the commercial send-off that Muddy deserved for changing the face of popular music, but it’s far from a last gasp.

While Marshall Chess must take some responsibility for Electric Mud – it was his idea to flank Muddy with avant-garde psych-rockers Rotary Connection – the bluesman himself had his eye on the counter-cultural dollar (“I played for so many of these so-called hippies that I thought probably Icould reach them”).

Waters is all at sea among the fuzzboxes and parping saxes, misplacing his mojo on Hoochie Coochie Man and reduced to copycat on a cover of Let’s Spend The Night Together. It sold well, but Muddy couldn’t have sounded more uncomfortable if they’d stuck him in beads and a kaftan.

The Muddy Waters tracks you need to hear

I Got My Brand On You

I Love The Life I Live

Got My Mojo Workin’

I Want To BeLoved