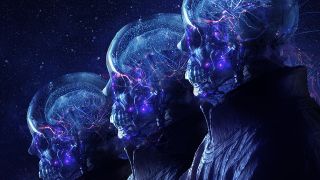 With an album title like that and its accompanying trippy album artwork, it was clear that the band would be further breaking down genre boundaries and delving into the outer realms of consciousness with the new album – something we've come to expect from a band who have been evolving and expanding their sound relentlessly throughout their extensive career.

“Music is a fascinating quest without end… and it would be a mess to express the same range of emotions, a mess to remain frozen in the same aesthetic, the same energy, a mess to compose and release the same thing again and again… and again.”

Hammer exclusively previewed the new offering, noting that the band "have shifted their axis from dense, roiling pitch-shifting dynamics to a more refined and open-ended sound, vaster in scope than ever before, devotional in its splendor and fealty to powers beyond time and space, and capable of ensnaring a new generation of intrepid metalheads drawn to the notion of black metal as a spiritual, mind-relocating experience.”

Now we've been treated to yet another exclusive taster of this new era of the band, with first track Nomos Nebuleam – and we can share it with you all!

It's is a kaleidoscopic trip through traditional black metal tremolo and tritones, eerie choral vocals and blast beats into deeply atmospheric, acidic riffage.

Preorder Hallucinogen here if you live in Europe or here if you are a resident of the US.