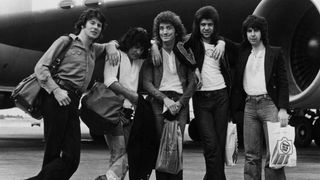 At a certain point in the evening we like to lay claim to AC/DC, Rod Stewart and Jethro Tull among others. Next morning we remember there’s no need, since Scotland has done rather well in terms of purely homegrown rock output. True to our stereotype, we prefer the troublemaking route to the direct one, which is probably why Scotland’s rock output is irritatingly eclectic – and undeniably dripping with character.

Arguably one of the greatest frontman from any country, Alex Harvey had been a teenage idol before combining forces with heavy rock band Tear Gas for eight albums between 1972 and 1978. They’re most remembered for their live shows featuring the fearsome attack squad of Harvey, harlequin guitarist Zal Cleminson and bass giant Chris Glen.

Skids co-founder Stuart Adamson’s second bite of stardom was his best, combining traditional rock values with traditional Scottish influences to create a global sound with Big Country. Tracks like In A Big Country perfected the gaelic rock pioneered by Thin Lizzy and others, and (unfortunately) helped the Proclaimers exist.

The biggest singer in history (maybe) helped create neo-prog rock with Marillion in the 1980s and even brought the genre to a mainstream audience with hits including Kayleigh and Lavender. The band went on to more or less invent crowdfunding while Fish, solo, retains a unique creative approach to music.

The stalwart heavy rock band from Fife have never deviated from their course in 48 years, and Nazareth seemed invincible until Dan McCafferty was forced to retire in 2013. Dan was such an influence on Axl Rose that he was invited to sing at the Guns N’ Roses frontman’s wedding. He refused. That’s Naz.

The west of Scotland had turned away from its heavy rock tasted of the 1970s until The Almighty reminded them what they’d been missing in the 1990s. Known for classic track Powertrippin’ (sometimes sung as “Harold Shipman”) and for giving birth to frontman Ricky Warwick, who now fronts Thin Lizzy and the Black Star Riders.

The owner of the voice Rod Stewart wishes he had admitted that he’d been a naughty boy at times until a brain haemorrhage landed him in a wheelchair from 1994 to the present day. Frankie Miller has been cited as one of the most authentic rock and blues artists in the world – even by Otis Redding’s widow.

From the backstreets of Paisley all the way to Baker Street, Gerry Rafferty was another west-coast artist whose work spoke of the hard industrial Scotland of the mid-20th century. He started out as Billy Connolly’s Humblebums bandmate before forming Stealer’s Wheel then finding success in his own right. The drink (as it so often does) took him in 2011.

Poster boys for Scotland’s take on 80s indie-pop, Bobby Gillespie and co underwent a number of transformations, including psychedelic and garage rock periods, before emerging as unexpected elder statesmen of rock with very comfortable cross-genre leanings. 1995 single Rocks was when it became okay for fans of heavier music to like Primal Scream.

Somewhere along their long development the fan call “Mon the Biffy” became “Mon the Bif” and Simon Neil’s trio became slightly suspect outlanders to a fully-fledged rock force. In the studio they’re unremittingly experimental. On stage Biffy Clyro are unremittingly powerful – and one of those few bands who use a natural Scots accent to great effect.

Primarily instrumental unit Mogwai still manage to apply Scottishness without needing an accent, and in recent years they’ve matured into a thought-provoking influential outfit that, while not quite being mainstream, have earned respect from many directions. When Trent Reznor sends you raw files and says, ‘Do what you want with them,’ you must be on the right track.

Ten Of The Best: Scottish Metal

Get it up ye: The Best Alternative Scottish Music Playlist